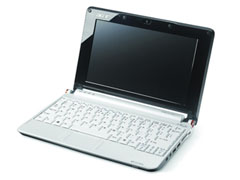 I love my Acer Aspire One. I originally planned on purchasing one of the new MacBook Pro’s and bought the Aspire One simply to take notes in class. However, I really see no need to blow more money on a full-sized notebook anymore. The only downside to my Aspire is that I got the 110L with the 8GB solid-state hard drive.

I’ve gone through many operating systems on my AAO, and while Ubuntu is definitely my favorite, it’s just not up to where I need it to be. The battery life is only around 2 hours, 3D doesn’t work properly in 8.10, and the wifi would crap out sometimes among other things. The only real option for me is Windows XP and I’ve installed many different versions of that as well, ranging from stock SP3 installs to nLite installs posted elsewhere on the Internet.

Until now, I’ve never really been happy with the end result. A stock XP install was way too bloated and required a lot of work to remove components and tweak services and settings to work well on the AAO’s limited screen and HDD space; yet some of the custom versions I attained had features like Remote Desktop missing which I use frequently to connect to servers on my home network. Anyway, enough with the background story, I finally bit the bullet and created my own custom "Acer Aspire One" version of Windows XP using nLite. I based a lot of my removal of components off a similar guide for the Asus EEE PC here. The install ended up taking up about 600MB (down from 1.2GB) with 18 initial processes running and just under 80MB of page file usage.

I’m assuming you are already familiar with how to use nLite. If not, follow the first 7 steps in this guide to get up to speed. I’m using a version of XP Pro with SP3 already slipstreamed in. 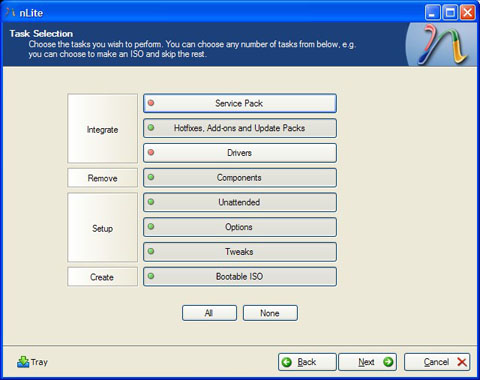 Next up, integrate in the RyanVM post-SP3 update pack available here. 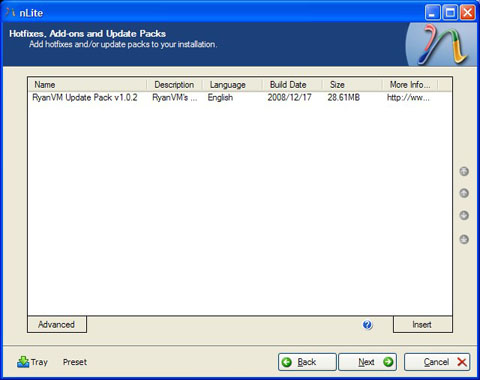 These are the options I selected for compatibility, I checked the options that I wanted to make sure I kept functionality for. 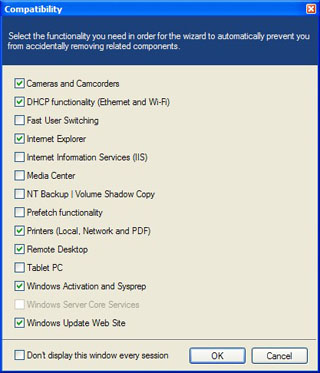 For Applications components, I removed everything except Calculator, Charmap, Defragmenter, and Paint. 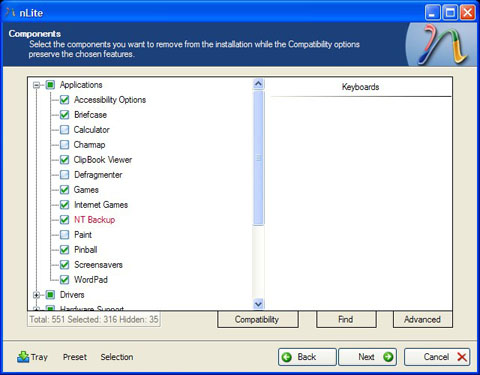 For Drivers, I removed everything except for Modems as I plan to tether my iPhone with my Aspire down the road. 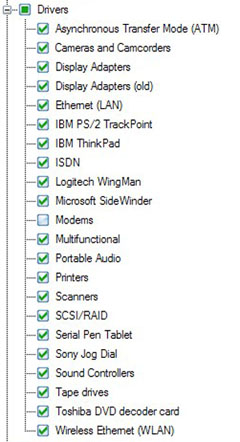 Here is what I removed under Hardware Support.

I removed all the Keyboard except the United States ones and did pretty much the same thing for Languages. 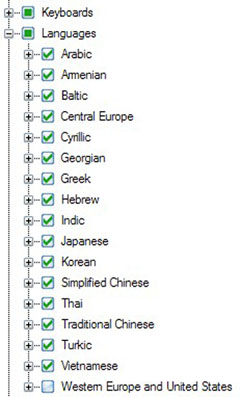 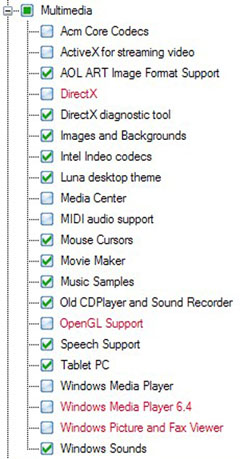 For Operating System Options, make sure you don’t remove Manual Install and Upgrade otherwise you will get a BSOD during setup if you try to install XP from a USB drive.

I didn’t remove any services as I planned on simply disabling them after the install. Also remove any unnecessary directories.

The Unattended screen is pretty self-explanitory. Fill in your Product Key, turn off the Firewall, Hibernate, and System Restore. Also flip through the tabs at the top and fill in details like Owner Name and your Timezone Region. 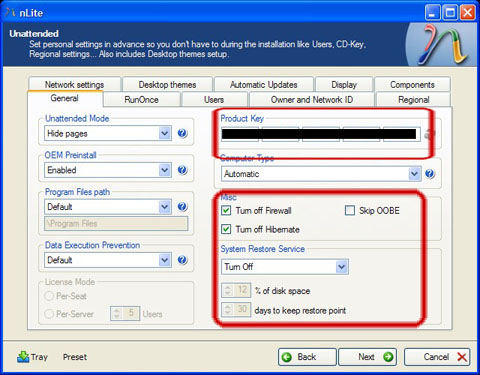 I chose to go with the black background and classic-style installer as it’s supposed to be a bit faster. 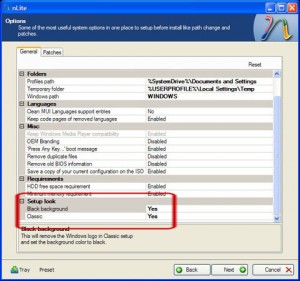 Under the Patches tab, I disabled SFC. 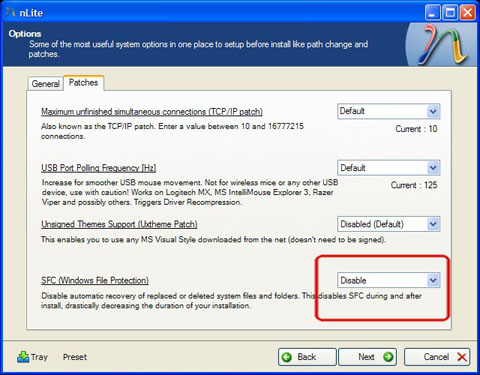 Tweaks. These next few are completely up to you whether or not you want to apply them. 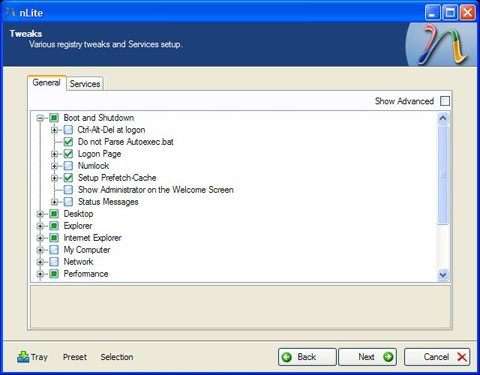 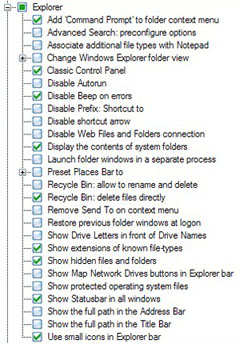 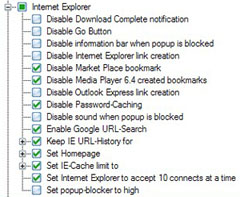 I skipped the My Computer and Network tweaks, you can look through them and see if there is anything you want to apply though. I would recommend applying the following Performance tweaks though. 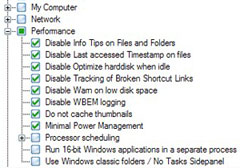 I skipped the Security tweaks, but feel free to look them over. My Start Menu tweaks are also completely up to you whether or not you want to apply them. 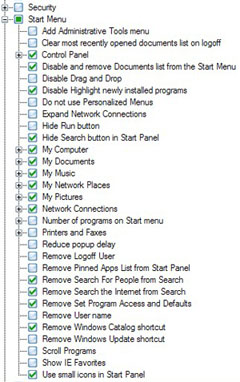 Taskbar tweaks are again up to you. 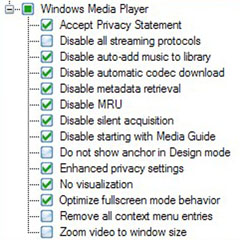 Next up, start the process and you should end up with a reduction around 360MB. 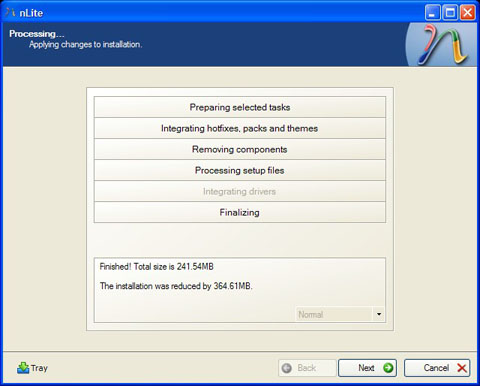 I would recommend making an ISO and burning it to a disc. nLite saves the configuration on the ISO so you can always go back and further tweak your configuration. 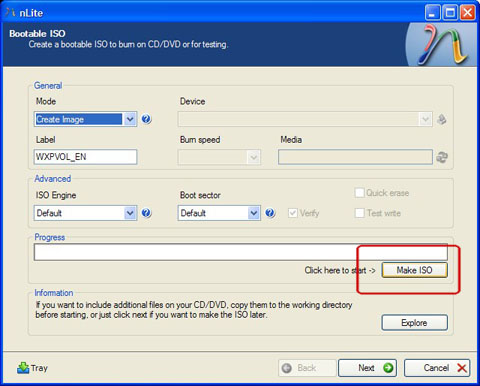 That’s pretty much it for the configuration part. Simply put your XP install on a flash drive using USB Multiboot 10 available here (alternate link) and enjoy your custom slimmed-down version of XP!

3 thoughts on “How to Create a Custom Windows XP for the Acer Aspire One Using nLite.”